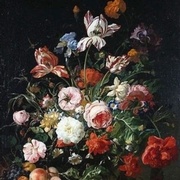 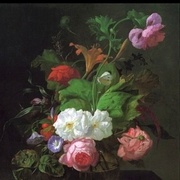 The “Dutch Golden Age”, which occurred roughly between 1568 and 1648, witnessed a blossoming of trade, economics, science and art. During this period, the work of women artists was encouraged. Two of these women, Rachel Ruysch (1664-1750), and Maria van Oosterwijck (1630-1693) are remembered for their floral paintings. A third artist, the German born Maria Sibylla Merian (1647-1717) moved to Amsterdam, and became known for her scientific drawings of flowers and other wildlife.

The still life genre of painting became especially significant during the Dutch Golden Age, and floral still life works make up a significant sub-genre.  Though flowers painted in this period are characterized by an intense, almost encyclopedic realism, compositions were often amalgamated from individual studies, or copied from book illustrations.  In addition, blooms from very different seasons were routinely included in the same painting.  This is in part a result of the position of flowers, in particular tulip bulbs, within the Dutch economy.  Flowers were a significant source of wealth for many business men.  Fortunes were routinely made and lost in the trade of flowers.  Though the large mixed bouquets seen in these paintings share many similar aspects with those we create today at Westmount Florist, they possess a fundamental unreality when considered in relation to their own period.  Vases containing mixed bouquets were almost non-existent within the Dutch home of the period.  Flowers more often displayed individually in specially designed vases known as “tulipieres”.  Floral still life subjects were in fact considered highly symbolic advertisements, and were used by Dutch tradesmen to display their product as well as their personal wealth and prosperity.

Rachel Ruysch was born in The Hague in 1664, but moved to Amsterdam at the age of three.  During her childhood she helped her father amass and display a large collection of curiosities and scientific specimens in their home.  Apprenticed at fifteen to floral painter Willem van Aelst (1627-1638), her work was to become highly influenced by his style and composition.  In 1701 Ruysch was inducted into the painter’s guild of The Hague, and several years later, was invited to work for the court in Düsseldorf. Ruysch continued to paint until her death at the age of eighty-five, and about a hundred paintings by her are known to survive today.  Her work is usually characterized by dramatically darkened backgrounds, and luminously coloured flowers.

Maria van Oosterwijck  was born at Nootdorp in 1630,  She studied  with Jan Davidsz. de Heem (1606-1684), and later worked in Delft, Utrecht, and Amsterdam.  Though barred from joining the Dutch guild of painters, her work nevertheless gained popularity in the royal courts of the Netherlands, Poland, Austria, France and England.  She gave artistic instruction to her maid servant, Geeren Wyntges (1636-1712), who was to later become a floral painter in her own right.  Today her work is housed in prestigious art collections worldwide, including the Cincinnati Art Museum and the Royal Art Collection in Great Britain.