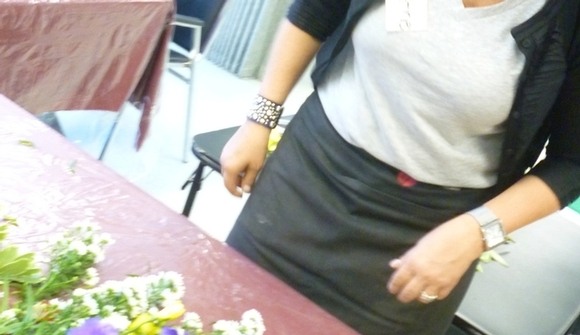 It really is true that giving feels better than receiving…….and so the story goes. Westmount Florist has always tried to be community minded and give back to charitable organizations as much as we possibly can. We get an average of 10 requests for donations each week and we know that every single request is for a good cause.

Last month I received a call asking if we would be interested in doing a floral workshop/demonstration for the AGI (Alzheimer’s Group).  I immediately said yes for two reasons, one my godfather suffered from Alzheimer’s and two because the Alzheimer’s Group is a truly wonderful organization.

As the day approached our store was so busy I barely had time to prepare as I normally would, so I decided to “wing it”. Not usually my “Virgo perfectionist” style but I really had no other choice.

I gathered up enough flowers, vases, greens and cutters for 10 students, grabbed our great team member Clea and away we went, both of us having no idea how it was going to go.

As we got to the AGI offices we were greeted by Marivic.  It’s not hard to see how much she loves what she does and those clients she sees everyday are lucky to have her.

Clea and I got busy setting us the table as the Alzheimer clients were finishing their golf putting exercise in the next room.  As they saw us approach with the flowers I could instantly see the joy on their faces and there were even a few ohhhhh’s and ahhhhh’s.

I first thought I would make an arrangement and explain what I was doing but that thought quickly changed as soon as the clients sat down they began to cut the stems and place them in their vases.  I immediately knew that my idea of winging it was the right choice………..they seemed so excited and just couldn’t wait to make their arrangements.  We had originally thought it would take about 1 hour for the arrangements to get done…….but boy were they fast.  As we helped them cut and place the flowers in their vases I couldn’t help but think how sad this disease is yet these people were all so happy.

After 20 minutes most of the students had their arrangements done and much to the surprise of both Clea and myself they very very pretty.  You could see the different personalities in the arrangements.  Dave grouped his very precisely while Belle placed them in a systematic way and Rhoda placed her so she could paint them later that day as she always paints her flowers.

If I had to grade those students they would all get an A+ !  The arrangements were labeled with their names and lined up for the photo shoot.  Each student soooooo proud of what they designed and they had every right to be.

Thanks to Linda for inviting Clea and I to share in a special day with some very very special people.  You can reach the amazing team at AGI at 514-485-7233.

p.s. Their website is currently being updated to better serve the community so checked back later :0