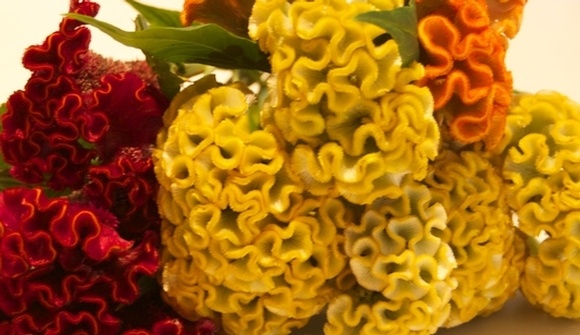 Its summertime and our fridges are bursting with color! One of our favourite flowers this time of year is celosia. Bright, vibrant, velvety...what’s not to love! Celosia looks especially beautiful when arranged tightly, showing off their colourful, curving shape and creating dynamic contrast with more traditional blooms. You may have seen these unique flowers in the store, or received them in arrangements, but here are 10 fun facts about celosia you may not have know before!

1. The common name for celosia is "woolflower", though in addition it is often referred to as "brainflower"

2.Celosia are a warm climate flower, and in the wild it grows most commonly in the highlands of East Africa

3. It is often grown as an ornamental garden flower, where is resistant to drowning during rainy seasons

4. In areas of South America, Africa, and South East Asia, the seeds of wild celosia are eaten as a grain

5. The greens and blooms of celosia taste like spinach, which in many cultures are eaten as an annual vegetable used for salads

6. When sold, as food in Nigeria celosia is known as "soko yokoto", meaning "make husbands fat and happy

7. The swahili name for celosia is mfungu

8. The growth phenomenon that gives most celosia its elongated form is known as "fascination"

9. Celosia come in many vibrant colours, but our favourites are bright pink, hot orange and brilliant yellow

10. Celosia forms the basis of many traditional herbal remedies and medicinal treatments