Poppy: A Flower to Remember 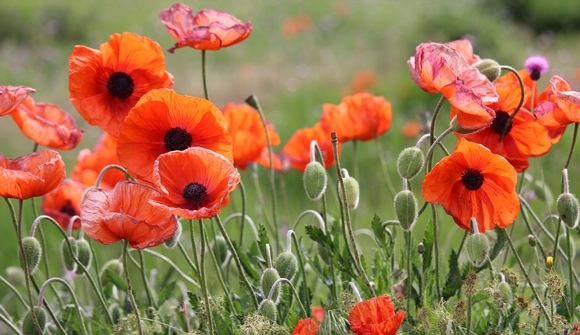 The poppy is a prominent symbol of remembrance that is usually linked to Armistice Day (November 11th), but many people don’t know that this delicate bloom’s origin as a symbol for remembrance actually dates back to the First World War.

These bright red flowers flourished in the soil that was churned up by fights on land. The large amounts of poppies that bloomed on the combat fields provided inspiration for the Canadian Doctor John McCrae to write his famous poem ‘In Flanders Fields’, which he wrote while serving in Ypres in 1915.

How the flower became an official symbol of remembrance

In response to McCrae’s poem, the American humanitarian Moina Michael wrote, ‘And now the Torch and Poppy Red, we wear in honor of our dead…’ She began campaigning to make the poppy the official flower to symbolize remembrance for those who had died in war.

In 1921, Britain began selling the artificial poppies to raise money for ex-servicemen and the families of those who died in conflict. In the span of just a year, sales of these vibrant flowers became so popular that in 1922 the British Legion opened a factory staffed by ex-servicemen to produce their own. It continues to do so today!

Pictured above: An artificial poppy from the 1920's

Where to buy a poppy in Montreal
You might be wondering if we carry the real version of these symbolic flowers at Westmount Florist. Since they are not particulary long-lasting flowers, we don't often carry them in our shops. Your best bet is to buy an artificial one from a veteran selling in your community! From late October until November 11th, poppies are available for purchase at various public locations. Here in Westmount, there are veterans proudly pinning red blooms to people's jackets at our local Metro grocery store on Victoria Avenue. And hey, if you're in the neighbourhood getting a poppy, come and visit us across the street!