Our Cup Runneth Over! 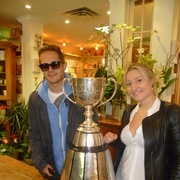 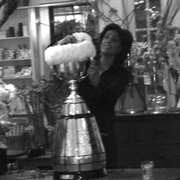 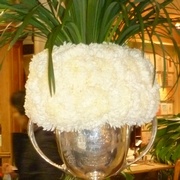 Over the years clients have brought us some of the most beautiful vases, containers and heirlooms to fill with flowers or plants, but by far the most exciting container Westmount Florist and I had to fill was the Grey Cup. For those of you who are not familiar with Canadian football, the Grey Cup is Canada’s version of the Super Bowl. Our Montreal team, The Alouettes have won the cup two years in a row ... can we make it three years boys!?

Just like the Stanley Cup, hockey’s holy grail (which unfortunately we have not won since 1993) the Grey Cup has a “keeper”. The Grey Cup’s keeper’s name is Dennis and he is responsible for the cup wherever it goes, he will not leave that precious cup alone for a second! Dennis and the cup were picked up at the Montreal airport and brought directly to Westmount Florist to have the arrangement made. The cup arrived and a white-gloved Dennis carefully unpacked it from its case. We quickly got to work filling it with big, full football mums! The customers in our shop began taking pictures of themselves with the cup, because you never know when it will be back in Montreal.

It was a bit of a challenge because we knew guests attending the event would want to pick up the cup and touch it, not to mention in the evening Dennis would be taking his baby back to his hotel room and tucking it into bed until the second day of the event. We solved this dilemma by creating an arrangement that was easily removed.

The event was for the Sisterhood of the synagogue the Shaar Harishmoyiam in Westmount, who provide meals to shut ins. I attended the event and just as I had predicted everyone wanted their picture holding the cup. We carefully removed the arrangement and placed it on a table next to the star attraction … well perhaps Anthony Calvillo and Anwar Stewart were the real star attractions! After all they are the ones that brought the cup to Montreal! GO ALS GO!