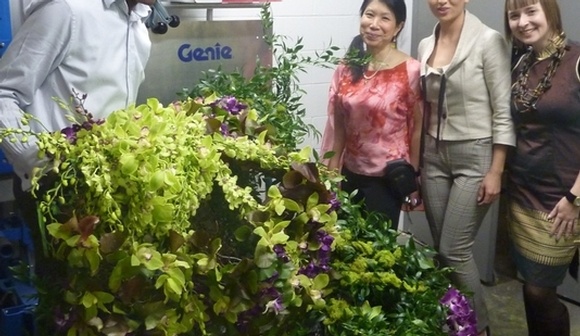 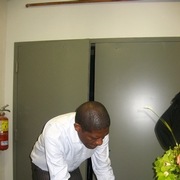 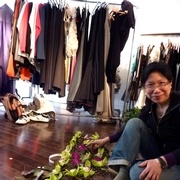 As the daughter of a florist I had flowers surrounding me my entire life, whether I liked it or not. I know that sounds strange, but looking through old family photos I can’t believe my parents actually made me wear those floral dresses accessorized with lime green daisy printed tights! They say most things come back into style, but it’s been over 40 years and I have yet to see someone wearing anything even close to lime green tights with yellows daisies. I still tease my mother about buying them for me, she chuckles and says how “snappy” I thought I looked back then. I guess I’ll just have to take her word for it.

Fast-forward 40 years. I’ve been involved in numerous charity events in Montreal, so when the Alzheimer’s Group asked me to participate in their event called “A Closet Affair” I whole-heartedly agreed. It really hit home for me since I had just lost my uncle to the disease. Helmer Joseph was my designer and he was going to transform me into a model for the fashion show, now that’s a tall order I thought…me a model?!

I was a little intimidated meeting him for the first time, since he had spent the last 8 years in Paris working with Christian Dior, Karl Lagerfeld, Christian Lacroix and Thierry Mughler.   As he stood there taking my measurement I thought about how many times I had dreamed of wearing a “floral dress” to an event.  Not a printed floral dress or silk flowers sewn on a dress, but a dress made from real flowers!

I told Helmer my dream and his eyes lit up. It was so exhilarating to see that he was just as excited as I was about the “flower dress”. Over the next few weeks we worked on the design and decided on our execution. The more time we spent together, the more our friendship grew.

Because Helmer and I chose to work with fresh flowers, the dress could only be constructed the same day as the event. On the day of the fashion show I arrived at Helmer’s with over 500 dendrobium and cymbidium orchids, 1000 galax leaves and moss. 7 hours later…the dress was ready, it took 1 hour and 4 people just to get me into the gown!

As I stepped onto the runway that night, the crowd gasped, no one could believe their eyes. I was so proud to be a part of this great event and such a fantastic charity. As I stood on the stage with my new friend Helmer, I realized we were kindred souls who both share a love for fashion, flowers and art but mostly life and all it’s beauty.

Thanks to Yoshi from team Westmount Florist for your help in making my dream come true. To Hofland Floral wholesale for their kind donation of flowers, and to Helmer, I look forward to our next collaboration and I feel blessed to have met you.